healing at the speed of light®

Whether it’s pain developed through repetitive strains in our everyday lives or the result of an injury, physical pain can have a negative impact on the quality of all of our lives. Healthcare practitioners across North America have discovered the power of laser light energy to heal injuries on a cellular level.

With the ability to reach deep into the mitochondria of the cell, Cool Laser Therapy (“CLT”) helps to stimulate injured cells so they can produce more energy and heal themselves naturally. This reaction helps to accelerate the healing of damaged tissue and reduce pain and inflammation. Depending on the severity of your injury, CLT can help you return to your active lifestyle, pain-free, within a fraction of the time. 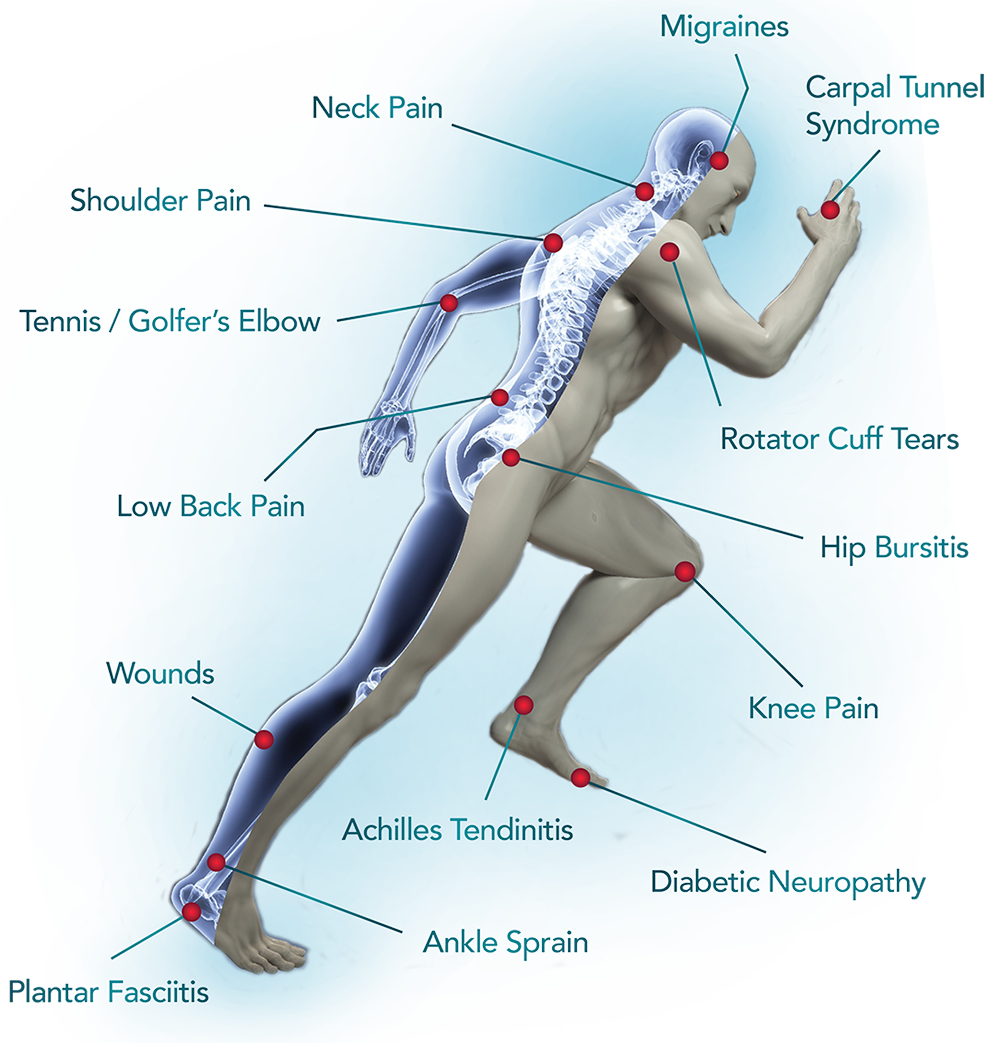 Theralase® CLT offers treatment for acute and chronic pain conditions* as well as a host of other conditions. Our lasers help you regain the active and healthy lifestyle you yearn for by utilizing the power of laser light energy.

Theralase® CLT systems have been cleared by both Health Canada and the FDA for the safe and effective treatment of pain associated with knee conditions.

*While over 4,000 clinical studies worldwide have proven the efficacy of low-level laser therapy in treating a host of other conditions, Theralase® lasers have not received explicit regulatory approval for these applications. In-clinic treatment of other conditions is at the sole discretion of the healthcare practitioner.

Cool Laser Therapy heals tissue ailments by injecting billions of photons of visible and invisible laser light deep into tissue structures. Tissue naturally contains protein strands called chromophores and cytochromes located in the mitochrondria of a cell (known as the cell engine), which have the unique ability to absorb laser light energy and transform it into chemical energy for the cell. This chemical energy is utilized by the tissue to significantly accelerate the healing process and reduce pain in the body naturally.
Theralase® CLT have been cleared by Health Canada and the FDA to treat chronic knee pain. Over 4,000 clinical studies have been conducted worldwide validating the effectiveness of CLT on over 100 treatment conditions, including: arthritis, low back pain, shoulder pain, carpal tunnel syndrome, concussions, wound healing, addiction rehabilitation, among many others. Ultimately, it is at the discretion of the healthcare practitioner to determine based on the best available clinical evidence which areas and conditions can be treated with CLT.
There are thousands of published clinical research studies that describe the positive effects of CLT. These studies range from studies on individual cell types to in-vivo double-blind randomized control studies. The areas of study range from wound healing to muscular skeletal conditions and have been conducted on different types of laser devices. Numerous clinical studies and research is provided on the internet and there are numerous books on the subject. One very good text is "Low Level Laser Therapy - Clinical Practice and Scientific Background", written by Jan Turner & Lars Hode.

The depth of penetration of laser light depends on many parameters such as the laser's wavelength, the power, the type of device driver (superpulsed, pulsed or continuous wave mode) and lastly the technique used. The higher the wavelength typically, the deeper the penetration; however, with wavelengths greater than 950 nm the water in the tissue absorbs light and the depth of penetration is drastically reduced, in addition to causing heat. Secondly, devices of greater power can provide better penetration, up to the Maximum Permissible Exposure (“MPE”) limit of tissue; whereby, they just induce thermal heat. Thirdly, the peak power of the waveform in the laser system is the most critical factor in providing depth of penetration. Thus, devices which are superpulsed have better penetration versus pulsed or continuous wave devices, because they have greater peak power densities for superior photon concentrations at depth, albeit at shorter time intervals.

Note: The Theralase® CLT can provide a direct penetration of tissue of up to 5 inches into tissue.

Typically, clinicians calculate the Energy Density (“ED”) in J/cm2 for a specific treatment using the following equation: ED (J/cm2) = (Average Power (Watts) x Time (seconds)) / Surface Area (cm2); hence; Time (seconds) = (ED (J/cm2) x Surface Area (cm2)) / Average Power (Watts) The surface area is the beam spot size of the laser device used. Since the beam spot size in lasers is usually quite small, typical ED's for clinical treatment protocols are in the hundreds of J/cm2; however, the effective surface area of a laser diode at tissue depth is approximately 1 cm2; therefore, this greatly simplifies the calculations. Therefore, ED (J/cm2) = (Average Power (Watts) x Time (seconds)) and Time (seconds) = (ED (J/cm2) / Average Power (Watts) It also becomes evident that devices with higher average powers will take less time to obtain the same energy density.
Since all patients are different in physical characteristics, as far as thickness and composition of tissue layers and sine laser energy is absorbed differently by water, hemoglobin and melanin, different people will require different dosages, so that the target tissue at depth obtains the optimal energy density. The depths of the target tissue also play a major part in this calculation. Since laser light energy will be absorbed by tissue layers that lie between the target tissue and the skin surface, a healthcare practitioners needs to increase the energy density at the tissue surface to obtain the desired energy density at the target tissue at depth. In order to fulfill the first law of photochemistry, laser light must reach the target tissue at depth with sufficient energy density to bio-stimulate the tissue.
No, although one must never shine the laser light directly into the eyes of anyone, as the laser light is strong enough to induce permanent eye damage if held in place for any length of time. Otherwise, we recommend that CLT not be used on the abdomen of a pregnant woman.
The major difference between laser light and normal light is the laser beam's ability to travel long distances without being dispersed. This is known as coherence, and it enables the laser to focus its power within a small surface area. Superpulsed laser light has been proven scientifically and clinically to have a strong therapeutic effect on nerve, muscle and joint conditions. A Theralase® CLT, for instance, doesn't induce thermal heat to tissue; unlike Class 4 industrial grade or surgical grade lasers. Instead, the Theralase® CLT provides superpulsed laser non-invasively and non-thermally at the tissue surface to heal human cells (the building blocks of the body); hence safely and effectively treating nerve, muscle and joint conditions.
Rheumatoid Arthritis (“RA”) is an autoimmune disorder that attacks the joints causing swelling and tissue damage. RA is different than non-inflammatory problems of the joints and often mistaken for Osteo Arthritis (“OA”), which is inflammation caused by wear and tear on the joints. CLT works by reducing the pain and inflammation caused by RA. The initial treatment schedule can vary dependent upon the severity of the condition and the length of onset, though the average patient will receive 2 to 3 treatments per week for a total of 10 to 25 treatments over a 4 to 8 week period. Since RA is an autoimmune disorder and is non-curable, in order to maintain quality of life a patient is placed on a maintenance program of one to two treatments per month; thereafter, to maintain pain reduction, inflammation and increased range of motion.
The attenuation (loss) of laser light through tissue follows an exponential decay formula, which significantly attenuates the amount of laser light available at tissue depth. To provide better treatment outcomes a healthcare practitioner is required to maximize the amount of energy density at the tissue surface by increasing the power of the laser and time of the treatment. The limiting factor with laser light is the amount of laser light that can safely be imparted to surface tissue, without exceeding the the Maximize Permissible Exposure (“MPE”) of tissue. This is why continuous wave lasers and pulsed lasers are not as effective as superpulsed lasers, which are able to deliver super high energy densities to tissue surfaces in billionths of a second, to allow sufficient energy densities to target tissues at depth.
CLT laser irradiation is dose dependent, meaning that too little will induce an undertreatment condition, the correct amount will induce an optimal treatment and too much will induce overtreatment.

Find a Theralase® Provider in your area

Theralase® cool laser systems are utilized by healthcare practitioners from clinics throughout North America and around the world.